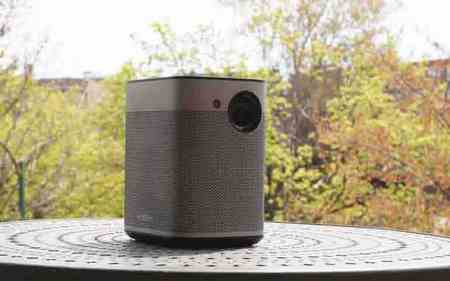 The MoGo Pro+ is the size of a portable speaker, so it fits easily into a small backpack or bag. The device weighs only 900 grams, so it's easy to take it with you to the countryside and have a movie show anywhere. There is no need to put anything under the projector - a sturdy stand with an adjustable angle is built into the bottom of the case. There's a universal thread, compatible with most photo tripods, at the bottom.

The trump cards of XGIMI projector are the possibility of standalone operation and a full-fledged Android TV 9 OS. It's enough to go through a few initial setup steps, and immediately you find yourself in a convenient shell, adapted for remote control. You don't have to enter your Wi-Fi password and Google account details on the virtual keyboard. It's easier to sync with your smartphone via Bluetooth in a couple of taps, and all your startup settings are copied automatically.

The responsiveness of the interface is a pleasant surprise. The device plays 4K content on YouTube without the slightest lag and allows you to accurately hit the right fragments of long videos. All this is done with the remote control buttons. The included remote is notable for its built-in microphone and Google Assistant call key. It's handy for dictating the names of films or TV programmes. All installed multimedia apps, including YouTube and Wink, are searchable. The work of other functions "Google Assistant" also does not cause problems: the projector understands commands in Russian, starts programs, prompts the weather, visualizes and speaks the found information on the web.

For specific tasks it is easy to connect wired or wireless peripherals: keyboard, mouse, gamepad. Controlling the projector from your phone is also comfortable - the CetusPlay, Android TV Remote Control and other apps are suitable for this purpose. For instance, the advanced Zank Remote displays everything that MoGo Pro+ shows and gives you full control over it from a distance.

In general, the XGIMI gadget has a wide range of applications. It works fully without a laptop or smartphone and doesn't need to be connected to an internet or power outlet. Any video files can be viewed from internal memory, an external hard drive or a memory stick. In addition there is 5 GHz Wi-FI, Chromecast and HDMI connection.

The Aegean Projector also allows you to play your own animated films for your kids and remotely control playback without having to go into the nursery. You can easily connect the gadget with an HDMI cable to a game console and hack away at something on the big screen. And you can use any Android or iOS mobile phone to quickly show off your photos on the big screen. You can also arrange a smart game - just retransmit the appropriate application from your smartphone to the projector. Simple games can also be played on the MoGo Pro+ itself. For business purposes, it makes for a spontaneous presentation in any room. Transmitting your Mac or Windows laptop screen via Chromecast is also easy.

Content and additional software are no problem. The official Google Marketplace for Android TV offers more than 5,000 apps. One tap in the OS settings turns off the restriction on installing third-party software - you can install APK from any source.

In addition to the perfect support for YouTube, the projector works well with other services. For example, with Wink the unit turns into a real TV, showing more than 200 TV channels. The VK Media app, available for free in the official marketplace, allows you to search for and watch any FHD VKontakte videos. Other services available include Kinopoisk HD, Okko, IVI, and so on. Netflix is not officially supported, but it is easy to install in a minute using the utility XTV Manager from the same Google Play. However, in this case the remote control will start working like a mouse - you can control it, but not as comfortably as with the Android TV version.

The XGIMI MoGo Pro+ runs on DLP technology and outputs a true Full HD. It automatically sharpens and corrects geometric distortion itself. Conveniently, the gadget does not need to be placed against a wall. There's no need to tilt it and no need to bother with mounting it. You can place the device at random on the edge of the microwave and project a recipe from YouTube directly onto the kitchen cabinet near the cooker at an angle - the picture even in those conditions will have perfect geometry and high clarity. The device easily copes with distortion-free projection onto the ceiling and with a backward projection through the cloth. Of course, with a screen and some sort of mount, there's no problem at all.

From a distance of 2.5 metres, it's the equivalent of a 78-inch TV. The image is brilliantly sharp across the entire field, with no highlighting in the brightest parts of the frame, stepless gradient display and smooth colour transitions. All this is comparable to a good IPS display, excluding detail in shadows. Special mention should be made of the absence of flicker and rainbow effects. Pixel grid is virtually invisible to the eye. Watching content through a projector is much more comfortable than on a conventional monitor - your eyes won't tire even after hours of movie marathoning.

The MoGo Pro+ loses out to displays and powerful desktop projectors in only one area: its brightness margin. The XGIMI's claimed 300 ANSI lumens is a respectable output. In terms of brightness it is comparable to an inexpensive LED projector. However, because of the need to cool the matrix it is much noisier than the MoGo Pro+, and it does not have the mobility. It is possible to get a cool picture at such brightness only in total darkness when projecting everything on a white screen from a distance of about two meters. Screening on a cloudy day isn't difficult either if you draw curtains over the windows. But in the bright area, the projector will only be able to show a simple presentation with a white background and large contrast elements. The device supports 3D-mode (glasses have to be bought separately), however, you should not seriously count on such a trick - brightness is not enough.

The AMLOGIC T950X2 processor, Mali-G31 graphics accelerator and 2GB of RAM installed in the device are not impressive on paper. But, as the experience of use has shown, in multimedia tasks performance is excellent. The gadget easily plays high-definition video, which sometimes struggles to play on a not-weak laptop.

Another plus is its almost silent operation. During the entire testing period the cooler only spun up to maximum speed when firmware was updated. When watching movies, the cooling system runs at minimum speed. You don't hear it even if you turn the cinema down. Speaking of sound. The built-in Harman/Kardon speaker system has a good margin of volume. The speakers deliver decent audio in the mid/high frequency range. This kind of sound is great for watching soap operas or listening to soft background music clearly and distinctly. When the bass is needed, the MoGo Pro+ is better suited for connecting other Bluetooth speakers, or for connecting to more powerful hardware, thanks to the audio output.

What about autonomy? If you open a tape in Full HD in the MX Player, at full brightness the projector will last for two hours unplugged. In economy mode, the 4 hours claimed by the manufacturer seems quite achievable. The projector is also capable of operating in an energy-efficient format as a Bluetooth speaker. The device also allows you to recharge other gadgets.

The capabilities of the MoGo Pro+ are hard to overestimate. It is a multifunctional device, which gives the user complete freedom of action. The XGIMI isn't restricted by cumbersome software, pay-per-view subscriptions or other restrictions, and it works just as smoothly as other portable projectors. Moreover, the gadget doesn't get noisy, doesn't get warm, and can do without a power outlet. For those looking for a quality mobile projector, this is an option to consider.