What off-roaders are afraid of: a situation where four-wheel drive won't help 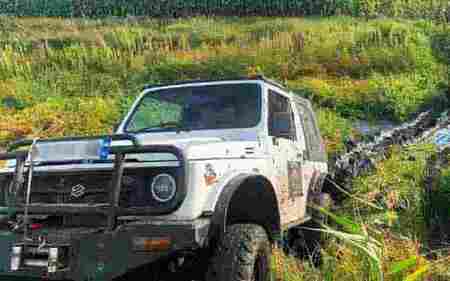 Can modern electronic all-wheel drive systems deliver torque from the engine to where there is no drag? The answer is no.

With the transformation of a modern car into a kind of computer on wheels, many car owners have come to believe that on the off-road, the on-board computer, if necessary, will quickly transfer the torque from the engine to where it is required, after which the car will calmly go on. Advertising promises only reinforce misconceptions. Meanwhile, no one has yet abolished the laws of physics. And if the coolest SUV in the world landed, for example, on perfect ice or sat on its belly, then no electronics will move it from its place if the wheels do not cling to the surface.

Let's remember a simple situation: a passenger car ("Zhiguli "or" Granta " –it doesn't matter) drove the upper drive wheel on a slippery section of road: for example, on a frostbitten tram rail. The second driving wheel is standing on the asphalt, but it is useless: the moment on both wheels is ... zero!And all because the differential equalizes the moments on both wheels: if one wheel is zero, then the other will be the same. And no electronics will change that.

The solution has been known for a long time: the differential must be blocked in some way.In particular, automatic locking can be carried out by self – locking differentials, they are also "self-locking", they are also high – friction differentials or LSD (Limited Slip Differential).But, again, electronics do not transfer the moment anywhere, but only create the conditions for its appearance in the right place.In fact, this is a further development of the ABS. When the system detects that one of the car's wheels is skidding uselessly, it realizes that its resistance to rotation is low, and therefore this wheel will not pull the car. At the same time, the second wheel, which has the best grip on the ground, stands still: the differential works! Then, activating the hydraulic pump, the electronic unit supplies fluid to the brake cylinder of the skidding wheel, the pads are compressed and the disc is slowed down. Feeling the resistance, the torque on both wheels increases. At the same time, the wheel, which has a good grip on the ground, helps the car to start moving.

On many all-wheel-drive vehicles, from the Duster to the Range Rover, this system allows you to refuse to lock all differentials. It slows down the skidding wheels, creating conditions for the appearance of momentum on wheels that have better grip on the road. According to this scheme, all-wheel drive crossovers and most universal SUVs are made.

Unfortunately, many people mistakenly believe that if the motor turns, it always creates a moment.The nomoment appears only when the motor performs useful work, that is, when there is a load.No resistance – no momentum.The same applies to a helplessly skidding wheel: no microprocessor can apply a moment to it!If the same "Niva" (and this is a real "tube" 4WD)if you hang at least one wheel in the air (or hit the wheel on slippery ice-it doesn't matter), then the torque on all its wheels, as well as on the flywheel of the engine, immediately drops to zero! Again, no resistance – no moment! And to continue driving, you need to create a resistance to the motor. Artificially increase the friction in the differential (up to its lock), slow down the rotating wheel, and even apply the old-fashioned method of tightening the parking brake-all such techniques only create conditions for the appearance of torque in the right place.

Finally-the exposure of the old movie trick, where the movie hero puts the car on two side wheels, but successfully continues to move. So: an ordinary production machine will not be able to do this, even if it has at least a hundred microprocessors. The differential will immediately reduce the torque on the grounded wheel to zero, and everything will end there. But the viewer should not guess this….