US stock market: decline on fears of growth 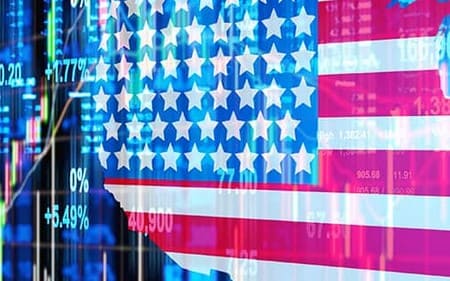 With the end of the era of expansionary monetary policy and the start of a cycle of interest rate hikes, investors sold stocks for most of the year, pushing the S&P 500 to its worst first half since 1970.

Today there was further evidence that rising interest rates have hurt demand in the US, with new orders being cut for the first time in two years, and manufacturing activity slowing more than expected in June.

Despite signs of slowing growth, the Fed's central bankers called for a second 75 basis point increase in interest rates in July, as a result of which investors assessed the potential impact on corporate profits.

In the previous session, all three indexes recorded a second quarterly decline in a row. The Dow Jones experienced the biggest percentage decline in the first half since 1962, while for Nasdaq it was the worst semester ever.

However, today's session showed that large-cap stocks such as AMAZON.COM (NASDAQ:AMZN) and TESLA, which offered support to the S&P 500 and Nasdaq.

Chipmaker Micron Technology is losing 5.89% after announcing a revenue forecast for the current quarter below market expectations, raising concerns about a negative cycle in the chip industry.

The broader Philadelphia index IF Semiconductor observed a dry loss, which was 4.19%.

Meta Platform loses 3.73%. This year, the company has reduced its plans to hire engineers by at least 30%, CEO Mark Zuckerberg told employees, warning them to prepare for a deep economic downturn.