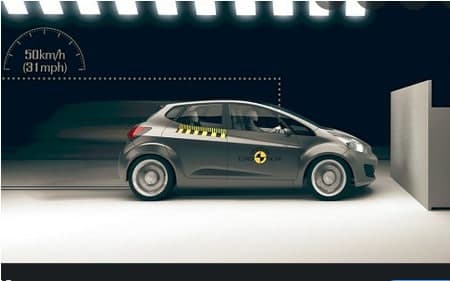 At the mere sight of people shivering - a vehicle weighing 1,300 kg approaches at a speed of 50 km / h, hitting the side of the Polestar 2 with all its might, where the driver is sitting. Behind the wheel of the Swedish car there is a mannequin showing a statistical man with a height of 1.78 m, at the back of the seats there are children's mannequins.

Hitting the side of the car is one of the most dangerous, because the zone of controlled body crush is very small here and it is difficult to manage the impact energy in such a way that it dissipates, deforming the body, but leaving the cabin intact. The car body around the roof center pillar and the undercarriage have to withstand enormous loads. You also have to program the side airbags very precisely so that they open at the right moment. The Polestar 2 managed to meet these challenges - the sensors placed in the mannequins did not register any loads greater than the permissible ones.

If they were flesh and blood people, hitting the side of the car probably wouldn't have hurt them much. The Euro NCAP test result is "good". "Very good" grades are not given, but they are "satisfactory", "sufficient", "mediocre" and "insufficient". So there was a good chance of getting a worse mark, but not in the case of the Polestar 2. In the final description of the crash-test results, all parts of the mannequins (adults and children) were marked green on the graphics, which means that they were free from serious injuries.

The above-described impact is not the only type of the so-called crash-test. There is also a test during which the car hits a massive pole sideways. This is to reproduce an accident where the car goes out of the road and hits a tree or a lamppost. The car is moved at a speed of 32 km / h and hits a stationary pole. Here, too, the energy of the collision is concentrated on a small part of the car body. Sensors placed in the body of the Polestar 2 driver dummy registered only a satisfactory result during such a collision, and the relevant parts of his body were marked in yellow.

Euro NCAP stands for "European New Car Assessment Program". Members of the independent non-profit organization based in Brussels are, inter alia, automobile clubs and insurance companies, it is also supported by some governments. Euro NCAP has existed since 1997 and carries out crash tests of new car models. On their basis, it issues a safety rating, the highest is awarded with five stars. During the tests, it is checked whether the cars ensure the safety of adult passengers, children and pedestrians if they are hit. Car assistance systems are also assessed. Tests are provided to obtain information on new models and are not mandatory.

Euro NCAP also simulates a frontal collision in two ways. One test involves hitting the car against a wall at a speed of 50 km / h, the second one hitting a deformable aluminum barrier (only 40% of the width), the speed of the car in this case is 64 km / h. Here, too, the Polestar mannequins have mostly turned green, and little yellow has appeared in their graphic image. This model fits perfectly into the Volvo tradition and is a very safe car for passengers.

The Swedish car also scores five stars in the Euro NCAP test because it is relatively safe for pedestrians. The front of the electric Polestar turns out to be "soft" enough - for example due to the floating engine hood, which prevents the head from hitting hard elements underneath. Only the headlights and the front roof pillars are hard.

Since the 1990s, when the crash tests began, Euro NCAP has been constantly tightening their criteria, taking into account the latest technical solutions used by cars. Models that were awarded five stars 10 years ago (the highest rating) probably would not receive them today. An example is VW Up, which was awarded five stars during its debut in 2011. Its electric version was tested in 2019 - the e-Up then scored only three stars. The reason is not the use of an electric drive, but rather poorer equipment - in 2011, the emergency braking assistant was standard, and not in 2019.

Stricter testing criteria make cars safer, and manufacturers are under pressure to implement better and better solutions. The weakness of the system, however, lies in the fact that today's results cannot be compared with those of years ago.