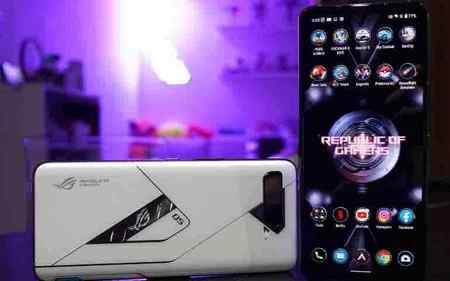 The ROG Phone 5's design reflects ASUS' heritage: chopped lines and eye-catching artwork. From the first moment you use it, you'll notice it's heavy (a whopping 238 grams) and extremely slippery, mostly due to its high-quality oleophobic coating on both sides. So it is better to immediately put the device in the case. At the same time, the case will hide the slightly protruding camera unit, and a small rim above the display will protect the Gorilla Glass Victus from damage. The case has some drawbacks too - it doesn't protect the right side of the device, and after two weeks of use it starts to feel loose.

Underneath the glass on the back of the smartphone is the ROG logo with RGB lighting. Note that the Pro and Ultimate versions have a small PMOLED display instead. The unit's frame is made of aluminium, helping to dissipate heat from the components during intensive work. On the left side is an additional USB Type-C socket and a five pin pad for the external cooler. If they are not needed, they are covered by a rubber cover, which easily comes off even with a normal grip on the phone. The chance of losing it is high. Below is a tray for two SIMs, so there's no way to expand the memory.
What kind of gaming phone can you imagine today without an active cooling system? The ROG Phone 5 has an external fan - which may or may not be included depending on the version of the device. To attach the cooler to your smartphone, you don't need to remove it from its case. It is enough to align the contacts on the body of the gadget and the fan, then push the phone until you hear it click into place.

You can't always do it right the first time, and it feels like you'll scratch the aluminum frame. It would be better if the manufacturer would have saved better mountings of the cooler from its predecessor. On the plus side there are two additional adjustable buttons, a handy stand leg and its own RGB-lighting. We decided to demonstrate the fan efficiency with the help of two benchmarks.
As for more gaming accessories, the manufacturer also presented ROG Centa II vacuum headphones. They are connected via the good old audio jack. "The ears boast active noise cancelling technology and a wide variety of ear cushions, among which everyone can find the one that suits their size. Other than that, the earbuds don't stand out in any way.

The ROG Phone 5 comes with a 6.78-inch AMOLED display with FHD+ resolution. Viewing angles are unbeatable, with maximum brightness enough to see information clearly even in direct sunlight. Colour reproduction is fine, moreover, the panel supports HDR10+ technology. PWM is invisible, but DC Dimming is available just in case. The touch layer poll rate is 300 times per second, with support for 60, 120 and 144Hz sweeps.

It's nice that ASUS didn't make notches in the display. The front camera is hidden in a small frame above the matrix, and there is a symmetrical indentation of the same size at the bottom, so perfectionists can sleep well. A small LED above the screen or the Always on Display feature is used to indicate missed notifications. To unlock the gadget securely, a fast fingerprint scanner is placed beneath the display, working, with few exceptions, without error.

The ROG Phone 5 features Qualcomm's new top-of-the-line Snapdragon 888 octa-core 5nm chipset. The big core reaches a maximum frequency of 2.84GHz. The Adreno 660 accelerator is responsible for the graphics. The test specimen gets 16GB of LPDDR5-type RAM and 256GB of UFS 3.1 standard permanent storage. The device runs Android 11 with the ROG UI shell. During the first setup, the firmware offers a choice of two design themes: a proprietary launcher or a clean version of Android interface. From the pre-installed software we'll highlight the specialized Armoury Crate software.
Then we proceeded to testing games. Each application was run with the best graphical settings. The device was always running in X-mode (maximum performance) with the cooler connected. The fps measurements were made with PerfDog utility.

Step to Leadership is an ordinary internet broker with a lousy reputation. Let's try to figure out why this trader has a bad reputation by studying the details of his work and understand: do I need to spend my time on him?

How to protect your finances from FXCM scammers, why are they getting good reviews? which documents to check with the broker and with the example FXCM make a full parsing, protect your savings from www.fxcm.com.